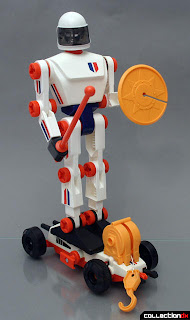 I actually scored one of these a few years ago. It was my favorite toy as a kid and it's still truly amazing given it came out 30+ years ago.

Mighty Max: The Maximum Man | CollectionDX: "Mighty Max is firmly in the mid-seventies Evel Knievel mode: a red, white, and blue action hero. It’s all very American, except for that head. Max’s chrome lid is obviously copied from the venerable Henshin Cyborg. Tomy’s nemesis Takara had experienced some success with its re-tooled 12” GI Joe figures, and I imagine that Max was Tomy’s attempt to replicate Takara’s success, but in the American market. The slavish replication of the chrome head is lame, but damn that head looks good. It’s like something out of a Russian Constructivist painting, angular and severe. And just look at this poor bastard. He may have a sweet motorized skateboard, but this man has known sorrow."
Posted by Jay Brewer at 10/26/2010 10:32:00 AM